A downloadable game for Windows

Schwarzerblitz is an indie fighting game written in C++ and running on a custom version the Irrlicht graphic engine (find out more here!). The game is completely in English and supports both keyboard and joypad, though the second is highly recommended.

It's 2064 and the world is not what we used to know. Fennoscandia has sunk deep into the ocean, half of Ireland is ridden by heamophages, nuclear power has been replaced by reality-distorsion-resonance (RDR) power plants and an alien planetoid has made first contact for more than fifty years,by now.

In 2063, a major accident shook the whole Europe: Euterpe, the Italian capitol city, was razed by an explosion of incredible power, followed by a storm of black lightnings. The accounts of the witnesses diverged and no light was shed on the real cause of the disaster.

After a one-year manhunt, the Delta Team has finally found a consistent trail, which leads directly to a secret governative project known as Schwarzerblitz, "the black lightning"... 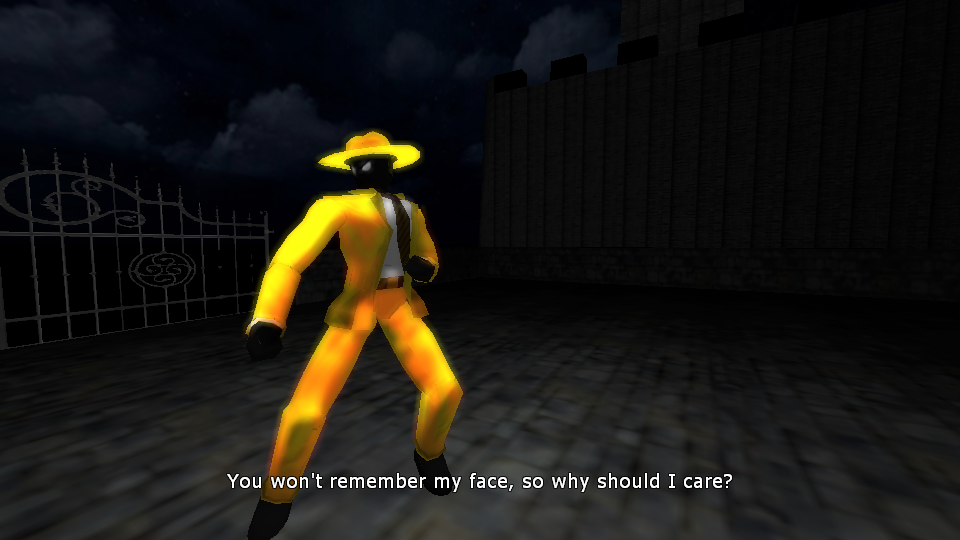 - fluid combo system: most attacks can chain into each other, leading to long combo strings

- impact attacks: send your opponent flying with powerful blows - as the only way to send them out of the ring

- trigger attacks: by using a bullet counter, one attack becomes guard-breaking and increases the hitstun, leading to easier combos and increased damage

- trigger revenge / combo breaker: when comboed, you can use a bullet counter to cancel the hitstun and strike back against your opponent 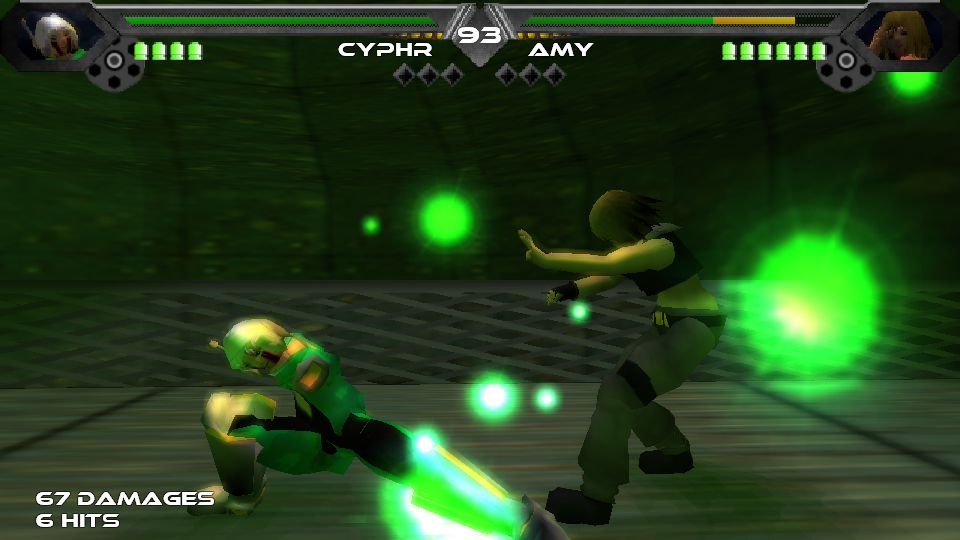 - 36  different stages with animated background elements and ring out mechanics

- extended movelists for every character, listing every possible chain

- moddable game engine (yes, you can add your own character, if you know how to use Blender!). A modding guide will be released after the alpha makes his way

- controls can be freely remapped in-game. Both keyboard and joypads are supported.

- a velociraptor with a minigun 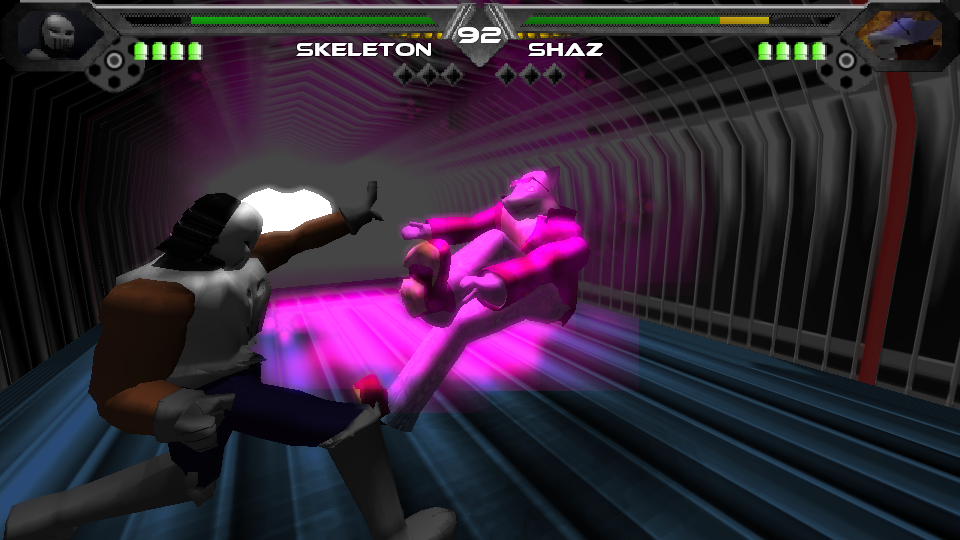 Important notes (before you play)

- the game requires Microsoft Visual C++ 2015 redistributable (https://www.microsoft.com/it-it/download/details.a...). Be sure to download and install it before playing the game!

- the game requires also Microsoft Directx9, 10 or 11. Directx12 is not supported. In case of doubt, download and install the Directx9 redistributable from this official link: https://www.microsoft.com/en-us/download/details.a...

- for any questions not directly covered in the F.A.Q. below, please contact me as soon as reasonably possible!

- the default controls via keyboard are C for selecting items, X for canceling a selection and Z to browse to the available costumes for the characters. You can remap this controls anytime from the Options Menu! See the quick reference guide for the in-game commands. 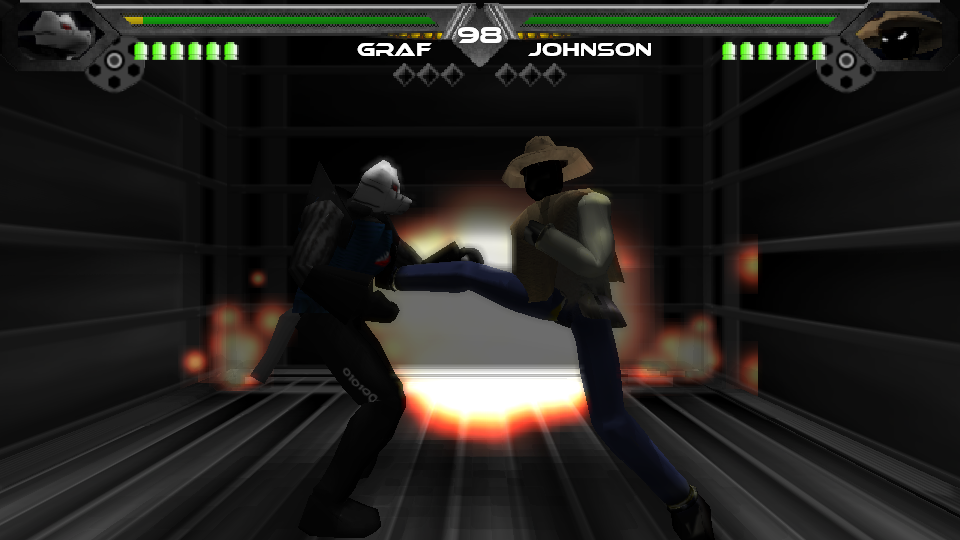 Q: The game does not start. It says that [insert name here].dll is missing

A: See the important notes above. Your computer probably misses one of the necessary Windows components.

Q: The game goes down to really low FPS on my laptop

Q: Is there any known bug / issue?

A: There is a known bug involving DirectX12. If you happen to have no view of the battle screen aside from the HUD while starting a match (i.e. black screen), dowload the DirectX9 Redistributable from Microsoft website (https://www.microsoft.com/en-us/download/details.a...) and install it on your PC. After this intervention, the game will run smoothly.

Q: Is there local any local multiplayer?

A: Yes, both with split-keyboard (very uncomfortable) or joypad + keyboard.

Q: I can't take a screenshot with Print in fullscreen mode

A: If you have Windows 10, use the command combination Win + Alt + Print. Otherwise, there's no obvious solution :/

Q: At some point, the game becomes irresponsive in windowed / borderless window mode

A: The window lost focus. Just click on it with your mouse to activate it again.

Q: Will there be online multiplayer?

A: It's on the wishlist! 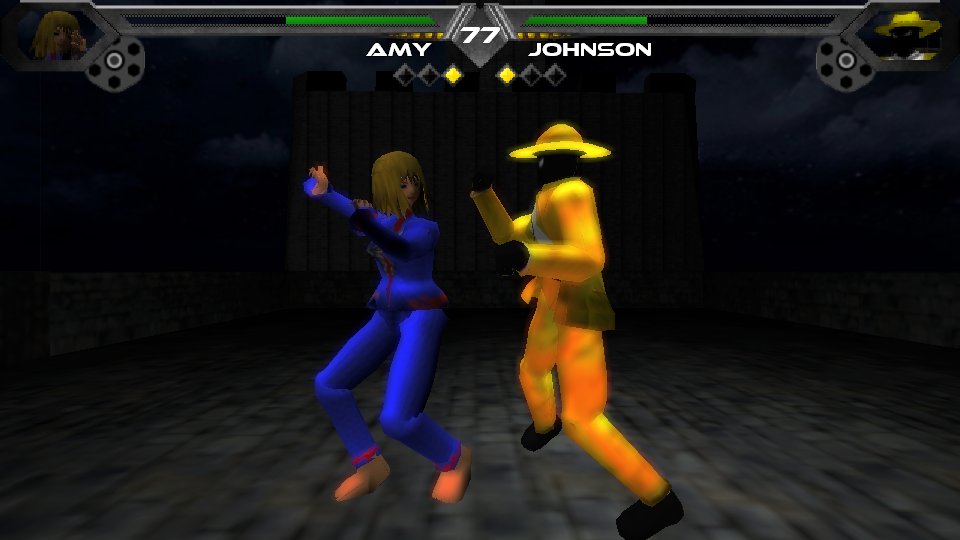 This game has been inspired by the countless hours spent in the local arcade playing Tekken 2 and dozens of other fighting games. It draws influences from Street Fighter, Mortal Kombat, and Soul Calibur as well, some for the character design, some for the game mechanics.

It's both a tribute to my passion for fighting games and the genuine realization of the dream of a (then) ten years old kid who was drawing these exact same characters on his school diary.

And now that kid's quite happy with the result :)

P. S. a full list of credits is accessible in-game ;)

The game needs both DirectX 9 or higher and VC++2015 redist to work.

Most computers from Windows Vista on should have already DirectX 11 pre-installed. You can check it by calling DXDIAG from the search menu. If you don't have any DirectX higher than 8 or you have only Directx12 (with which the game is not fully compatible), you can find the required files here:

Instead, installing the VC++2015 redistributable is required: without it, the game won't even start.

To start the game, just double click on SCHWARZERBLITZ.EXE inside the GAME folder.

Thanks a lot! Happy that you liked the game so far! Story mode can be a bit dark and it has many "emotional rollercoaster" moments :')

She will get her revenge and beat the monster :)

It has a smooth and easy to learn gameplay, and it's a pity I know almost nothing about Blender, heh.

Thanks for your kind words, the game is still in active development and I will have the final version rolling by the end of the year ;)

Reply
The Jester Guy1 year ago

You're welcome, and I'm glad this project is still active. Looking forward to the final results. ;)

I have uploaded an open beta on the 15th December ;) You can have a look at it to see HOW MUCH it has improved!

Also, I have set up a small Discord server for gathering feedback and sharing updates: https://discord.gg/vXKrvpV

The open beta will run until end of January, so that I can have enough feedback to finalize the game ;) Thanks for following!

Reply
The Jester Guy1 year ago(+1)

I have joined it. I'll post my impressions and suggestions there instead of here.

I hope everything goes well. Happy holidays and may 2019 be a good year for both of us. :)

I have seen you around the server, thanks a lot for joining! Can't wait to hear your feedback about the game! So, happy holidays and a great 2019! 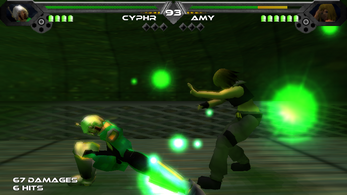